Wait! Before we eat…

Amateur food photography is nothing new. What else can be said about the now mundane practice of pausing before a meal to document it so the image can be shared and admired? Perhaps nothing, but I’m going to share the following experience, anyway.

About a month ago, I treated myself to a day at the Huntington Library. After wandering the gardens and visiting the Reformation exhibit, I decided to have some lunch in their upscale cafeteria. I took my tray outside to what I’ll call the veranda, because I like that word, and sat happily alone amidst people of various ages. That day there was a high school group visiting, probably a private school judging by their uniforms. The girls wore sweaters and skirts. (What’s with private school uniforms and skirts? Beyond the scope of this post…)

So there I sat, eating a passably tasty veggie wrap and enjoying the fresh air and the murmured conversation that filled it, when into my field of vision walked a trio of private school students with their own lunch trays. They selected a table at the edge of the veranda that overlooked the gardens, set down their trays, and sat. But as soon as they had done so they were standing again, each of them taking a step or two backward with their smartphones held aloft, attempting to properly frame their respective meals. After taking satisfactory pictures, they sat and proceeded to eat.

I took out my notebook and made a sketch of the scene, along with a few notes: 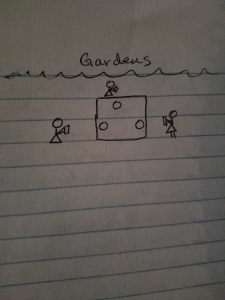 Or does the ubiquity of such a practice mean that the quotidian is just that, and layering these rituals temporally is no longer in itself significant? When so many snap pictures of their food to share them in the pursuit of technologically mediated attention, is that not simply a mundane cultural practice?

No less meaningful, but meaningful in a proscribed, ritualized way.

I suppose I mean to say that it’s no longer art.

Filed under Art of all Kinds, Contemporary, Technology