A few months ago I read The Quarry Fox and other Critters of the Wild Catskills by Leslie T. Sharpe. The Literary Review recently posted my review.

I miss thinking about these things

Witness the playground remade, reborn for a new generation. Nestled in an unassuming hillside of a NW Pasadena neighborhood, it looks to be full of realized dreams. It is the epitome of modern sensibilities, of enlightened oneness with its surroundings. It encourages climbing, risk-taking, exploration, imagination. It is high on its own smug progressiveness. It is restful, peaceful. It beckons to children of all ages with visions of infinite possibility! 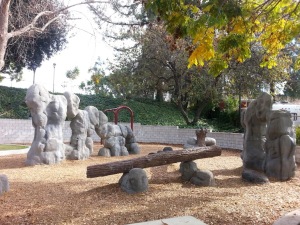 That log is not a teeter-totter. I was disappointed, as well.

Hang on (but not to the non-existent monkeybars). Let’s back up.

How much time, how much work and sweat, how much money and planning was spent to level that area, to carve out the space in that hill–not just for this particular playground, but for all its previous iterations? And for what? To simulate the nature that can be found a few miles to the north, up in the mountains and canyons of the San Gabriels.

Children in NW Pasadena should have access to that natural splendor. Many do not, for various reasons closely tied to socio-economic stratification. This playground provides at least a representation of the natural pleasures they may not have a chance to discover until they are free of this segregated city.

But so too should these children have access to the natural, native splendor of the non-built environment surrounding their suburban dwellings. What did that area look like before it was razed and built and rebuilt to resemble a not-too-distant nature? What possibilities for play did their neighborhood possess before city officials (and hopefully the neighborhood associations) remade it in the image of en vogue recreation?

By remaking, by simplifying and decontextualizing and re-ordering the parts to ensure a finely tuned balance of muscular engagement as dictated by the latest research, this bourgeois playground equipment implies that the real thing is unsafe. “Ignore those living trees over there, kids, and climb on these fake rocks!”

A simulacrum of wildness, of yesterday’s childhood.